“How’s that new feature coming along?” 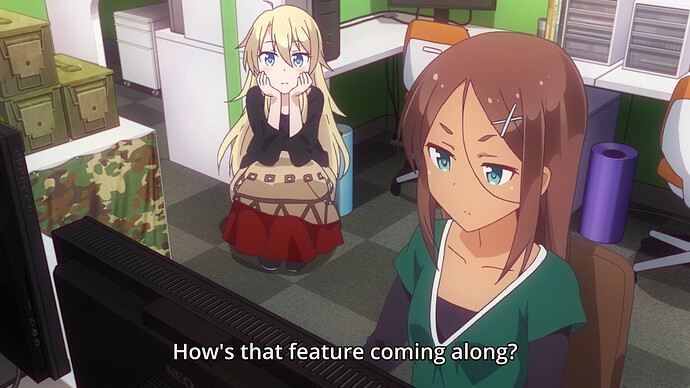 Due to there now being a limit on the length of our changelog reports they will be mirrored at our OutFox Wiki.

PLEASE, IF YOU FIND ANY BUG IN OUR GAME REPORT IT EITHER BY MAKING A ISSUE ON OUR BUG TRACKER REPOSITORY OR IN OUR DISCORD SERVER, WE WON’T BE ABLE TO FIX BUGS THAT ARE NOT REPORTED TO US!

This build fixes several of the reported bugs, as we had to pull the previous release due to operating system updates between release dates. Sometimes having a monthly release schedule is awesome, but it does tire us out!

Anyways… Lets get back to the update.

This mini hotfix includes a few things we were going to leave to the next release, but as we had to fix bugs in them anyway, it was easier to apply.

The big news is we (now finally!) have passed the prerequisites for GateKeeper on Mac, so this hotfix should behave and work fine, without any issues. Do remember to just drag and drop as the dmg lets you know how to do so, and it will run as other applications. Thanks to Jose and Squirrel for their efforts, and Jose for puzzling through, and Jousway for fixing one of the bugs in gh mode which was causing issuess as well.

There were several issues with the notes loaders and how antivirus/software protection apps were seeing OutFox when we were loading simfiles. This alpha hotfix now has addressed this by allowing you all to add more than one simfile in a song folder, cutting down on the folder rabbit hole. As we move to a more multi-game engine, this will also allow you to keep things tidy on your drive, and ensure it is a seamless experience for you all. Of course, please check the audio files are the same for the chart you are going to add to the folder, as you may find you have a nasty sync issue, but we also now support multidifficulty setups, as this is required for pump and taiko specifically.

This hotfix also sees a tweak to the difficulty system used in OutFox. In the past it was tied to the DDR paradigm and then left to rot as one of those ‘StepMania Things’. This however really stifled what we could do within the engine, especially with modes with different names/brackets etc. With the release of gddm and taiko we needed more difficulties than the game offered, so this has now been resolved. Themes which are based off of 5.1/5.0.x will still work due to the numbers being the same as before. If there are any issues with your theme, do let us know, but we have tested several with no issues.

These features have been missing from our keysound support since 2002, and we are proud to say that we have them in this hotfix! They are completely supported in gddm from the parser, (do reset your cache of course!) and they also work in beat/popn. taiko will need the support as well, so shout out to Jous for putting up with my waaaahh-luigi on getting it added to the game. This build also supports the hidden chips/keysounds for gddm and we’ll work on getting the final compatibility added in due course.

Due to the need to run with a slightly more secure runtime on Mac OS Catalina/Big Sur/Monterey on the Intel based macs there were some functions in our gh mode which gatekeeper did not approve of. The way the notes were cast have been fixed, fever/star power has been sorted to be more gh3 like, and taps and open strums are also tweaked to be better. Please give them a try and let us know! A theme for this mode is in the works, so apologies for the barebone approach we have at the moment. It’s also why we are an alpha after all…

Binaries have been temporarily removed due to a parsing error, we will be releasing a hot fix build shortly. Sorry for the inconvenience

An abbreviated changelog follows below

In Memorium of SHIKI, a long running well known game music musician, who gave us over two decades of music spanning dance, vocaloid, techno most of which was charted into BMS, SM and others, sadly passed away this month.

This alpha, our loading screen is in memory of one of his more famous StepMania Based Charts, Air.

Here’s one problem I have (I have to put it here because I have no Discord or Github):

Whenever I launch the game, the screen goes blank, and sometimes, the picture doesn’t even display on Garuda Linux. I have to exit the game for the picture to come up again at least 50% of the time.

Can you provide your game logs? It should be located under /home/yourUsernameHere/.stepmania-5.3/Logs (in case there’s any crashlog, it is located under the root folder).

I fixed the issue, @SHRMP0. I altered some things with the .ini files, and that worked.

Could you tell us in case anyone else encounters this issue? @Neigdoig

I’d like to know where on the forum and how to go about it. I don’t understand exactly what you mean @Lirodon.

no I mean, reply saying what you did to make it work

I don’t recall, but I went to Preferences.ini in the save file on my Linux machine, and changed something to say the least. I’ll take a look once I install 4.9.9HF3 again. For now, I’ll play 4.9.8, since that one treated me well.

Update: I’m currently downloading the source code version of 4.9.9HF3, and I’ll see if that does anything for me. I’ll let you know if I find anything. Another problem is that whenever I’m done with the calibration synchronization, and I have new timings, once I say “Yes”, the game crashes, but that’s for the AUR package iirc.